But it is hard to label this allegory a depressing song, rather it is simultaneously a lovely and a plaintive rumination about life.  The singer accepts that he was wrong about whether the "show" (i.e., life) would have a song, but at least he understands and appreciates the nuances of the show, the innuendo and the irony of life.  Maybe life is lonely and in the end we all really do die ​alone among "empty chairs" and there is no orchestra even though we hoped there would be one  ("I assumed that a show would have a song, so I was wrong").  Yet the irony is that life does have a song, namely, this one and the many other songs about life that Billy has penned, or the musical Movin' Out.​ 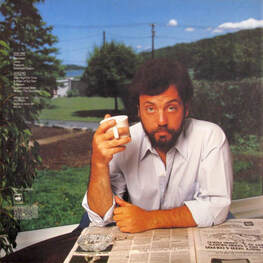 Musically the song has a wistful almost elegiac tone. Billy himself has said that it reminds him of Harry Nilsson's music. Thematically it reminds me of The Beatles' underrated "Fixing A Hole." The song was recorded by Billy without his regular band, but instead with a chamber orchestra led by a conductor with a cello, clarinet, accordion, and saxophone (Eddie Daniels), and Billy on the piano. The recording was also done to separate the stereo playback so that Billy's voice is separate from the orchestra which is appropriate given the song's title and theme.

At the end of the song, the opening strain to "Allentown" comes in again tying the whole album together. In a live version from MTV's Night School in 1982 (see video below, right), Billy goes right into a few bars of "Allentown."

For serious Billy Joel fans "Where's The Orchestra?" represents the best of Billy Joel, music and lyrics that complement each other and take the listener to another place and inside one's self. The song is an appropriate ending to Billy's most ambitious album.  New York singer-songwriter Julian Velard covered the song on his 2014 album If You Don't Like It, You Can Leave. Listen to his cover here and read an article about it from Ultimate Classic Rock. Why did Velard chose this song, as opposed to a more well-known Billy Joel song? As Velard stated in the article: "People should know that outside his songs about Brenda and Eddie and Mr. Cacciatore, Billy Joel is (arguably the last) in the line of the great American song tradition that was born in NYC and was the zenith of popular culture in the first half of the 20th century. This song is proof.”

One expert on Billy Joel, Christie Brinkley, has said that "Where's The Orchestra" was her favorite Billy Joel song (not "Uptown Girl").  Fine choice.
Background Photo (blurred): Rollling Stone (1982)?  Also, the single cover is fictional, the song was not released as a single.