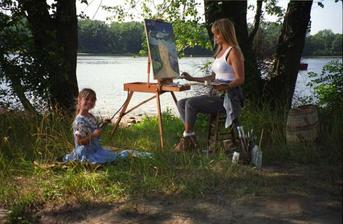 Christie and Alexa Ray from BillyJoel.com. Click to enlarge.
melody or I dreamt a great rhythm or a chord pattern or symphonic fragment for a song.' It was always music but it wasn't always the same kind of music. I have had literal dreams like other people but more often than not it’s an abstract kind of dream.’’   This article also discusses the origin of the song from a dream.

Lyrically, Billy is "searching for something" and clearly there is a spiritual angst or doubt behind the words, though Billy himself has stated he is unsure what the song means.  It is "so undefined" that he cannot clearly see what it is.  While there is some deeper spiritual meaning here, for me the lyrics suffer a bit from metaphors that are somewhat trite ("valley of fear," "river so deep," "desert of truth") for what thematically is a more searching or anguished song.  The topic could have used a more impressionistic lyric, which Billy does masterfully in the final song on the album, "Famous Last Words."

But don't listen to me.  What do I know?  The song was a huge hit, reaching #3 on the charts and earning a Grammy Nomination for Record of The Year.  At the Grammy Awards ceremony in 1994, Billy and his band gave a bravura performance of the song (see vide0 below), highlighted by Billy counting off the "millions of advertising dollars" wasted   during the pause in the song.  Billy, ever the clever wise guy, was mocking the network's earlier decision to cut off Frank Sinatra's acceptance speech for a Grammy Legends award in order to go to a commercial.   Billy also performed the song on SNL, see video.

An interesting alternative "percappella" version of the song can be heard here.
Videos